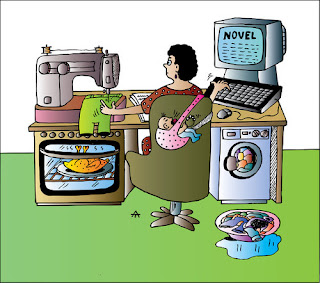 I know it has been a long time since I last blogged. Sorry, sorry!

The end of 2012 saw a lot of change happen in my life and unfortunately some things (like writing and blogging) were pushed to the side while I found I was extremely busy!

So what's been happening, I hear you ask? Oh... OK, so maybe you didn't ask but in case you were wondering I'm going to tell you!

Well, I guess the two biggest things are that our adoption application has suddenly started moving again (more on that in a mo) and I have re-entered the working world after 2 years 7 months. Big change.

I wasn't actively looking for a new job, but I had been thinking about getting out of the house a little more. As much as I enjoyed being at home full time, the original plan had been that I would stop working to raise our family (natural or adopted) so when neither of those things seemed to be happening, I was kinda just going through the motions and feeling more and more disconnected from the world. When I saw that my old employer had a job opening in a different department, I decided to apply on a whim and I don't think anyone was more shocked than me when a week later I was offered a position!

I took a part time 21 hours per week contract so I will still have time to write and do my own thing, although for the first 3 weeks I did work full time hours - exhausting! And surprisingly, I love it! I love having some independence again, and having my brain active all day, as well as having a reason to wear all my lovely shoes and make-up.

So, I had finally decided to go back to work. I was convinced that our adoption application was no longer being considered as when I last spoke to the adoption team I had a very tense conversation with the head of  the team as they wanted us to consider taking an older child (age 2.5 - 3 yrs). I said no, because I felt that it wouldn't be right for us. I'm only 28 and this would be our first child, to me it was unrealistic to expect this from us. After that conversation it was made to seem that unless we agreed we would no longer be considered. It was so very disheartening, and I had made my peace with it all.

Naturally that meant that the week I was offered a new job I also heard from the adoption team for the first time in 10 months saying they wanted to go ahead with our application after all. Typical. My husband and I agonised over the decision, but we decided to carry on but this time it would be on our terms. We won't change our minds on what is the best course for our lives, no matter the pressure we might receive, and I will work.

We met our assessing social worker for the first time in mid December. It was a very nerve racking morning and I didn't come away feeling all that confident about everything, but nobody said it would be easy. I have seen her once since then, and I will keep you updated as to how it all goes. Fingers crossed but I'm keeping my hopes under control in case it has to be put on hold again.

I have made it clear that my career is important. I gave up a well paying job, with the intention of re-starting my career after the adoption was done. That is no longer an option. I wanted to go back to work as the longer I leave it, the harder it will be to get back into it.

So, there is those two things and I have also been decorating my house, which has taken up a lot of time and still isn't done!

And that is why I haven't blogged for while! Things are starting to settle down now so I am looking forward to getting back to writing and having more time to read again.