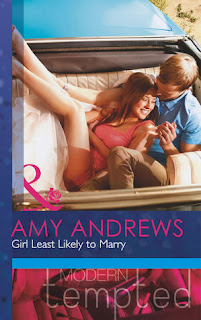 "Talk nerdy to me
Samuel Tucker is absolutely the last person scientist Cassie Barclay would ever date. Yes, he’s gorgeous, but he’s also far too cocky for his own good and thinks that pi is a tasty afternoon treat. So when he asks her to dance at her friend Reese’s non-wedding she’s wondering why on earth she says yes!
Tuck is used to people assuming he’s all brawn and no brain, and amuses himself by winding Cassie up. But when he finally takes her to bed, suddenly it’s Tuck who can show Cassie a thing or two! Can he convince her that love and sex have nothing to do with logic and everything to do with chemistry?
Don’t miss the linked stories in The Wedding Season quartet – Available in MODERN TEMPTED™"

Despite hearing many good things, this is actually the first book I have ever read by Amy Andrews. Naturally I was excited and had high hopes. I don't think I was disappointed with the final result!

This is the second book in The Wedding Season mini-series and follows straight on from The Unexpected Wedding Guest by Aimee Carson.

Readers beware... this book is capital H hot! And has so much will-she?-won't-she? sexual tension you'll virtually be perching on the edge of your seat! (P.s. Sort of a mini spoiler - there is a faked orgasm, which was not only very brave of the author but almost made me want to cheer out loud. Lol! Immediate thumbs up!)

I really enjoyed the flow and pace of the story as well as the way the relationship built throughout the story. The growth of the characters vs. the time span is spot on and holds your interest.

I can't quite decide if there was enough of the hero to really get to grips with him, the heroine was such a detailed characters that the hero's character kind of got lost somewhere among it all. The author's style suits me perfectly, lots of spark and humour along with well thought out characters. The writing suffers from too much repetition at times, too much of the heroine 'sniffing' the hero and the word 'pheromones' appears 38 times a bit too many IMO (I didn't count, Kindle worked it out for me!). The dialogue, however, is just right and is one of the main strengths of this book.

Overall I very much enjoyed this book, it's just the kind of book I expected from the Modern Tempted series.