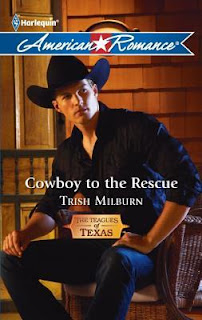 "Ryan Teague was always a bit of a loner. Before his traumatic tour in Iraq, keeping to himself was a choice; now, well, it's a necessity. Ryan feels he's too damaged, too scarred to be around the people he loves most. And a relationship? Out of the question. What woman wants a broken man?
All that changes when Ryan meets the new ranch chef. Gorgeous, funny and a helluva cook, Brooke Vincent charms everyone at Vista Hills, especially Ryan. He recognizes something else in Brooke, too—behind that warm, easygoing demeanor, Brooke is hiding some scars of her own. Suddenly, all Ryan can think about is making sure no one hurts her again.
Brooke and Ryan help each other begin to heal. But just as their trust grows into something more, Brooke's past threatens to ruin it all.…"


It's been a while since I endulged my pnechant for cowboy's! Oh, and only 20 more books to go...

The heroine Brooke gets a job as a cook for a ranch resort in Texas hoping she will finally be ale to make a new life for herself and put her fear behind her. She meets the hero Ryan, the resort owner's son, on her first day and there is an immediate connection between them. Ryan is surprised by his reaction to Brooke, he hasn't felt anything quite so strong since he returned from the military after he was serious injured during a traumatic incident while on duty in Iraq. They both sense the sadness and loneliness in each other and even though they try to avoid eacth other they begin to grow closer and closer. Even though Ryan feels a lot more for Brooke than just desire, he doesn't know if his fragile mental state can cope with opening up to her, as well as his feeling that Brooke is also keeping secrets.

I really enjoyed this book, although I have to be honest and say that the ending with the sort-of suspense storyline kinda spoilt it a bit. I loved the way the author gradually built up the relationship between the hero and heroine - it felt very natural and incredibly romantic. The hero and hero both had issues, and these were handled and dealt with well both as individual characters and together. The surroundings are described beautifully and the whole story has a wonderful flow.

Overall, this is a wonderful real-feel romance... but not a great ending.